The March for Fossil Fuel Freedom, to be held on March 16-18, 2019, is being organized by a coalition of faith communities, non-profit grassroots groups, and 350 Silicon Valley, to shine a spotlight on Wells Fargo’s role in financing the fossil fuel industry.

This 32-mile “pilgrimage” march from Palo Alto to San Francisco will draw attention to how Wells Fargo’s investment policies (including the funding of private prisons) have devastated our climate and our communities. At the same time, it will hold up the promise and possibility of reinvesting instead in climate solutions and of transitioning to a better, more just world.

Niles Discovery Church has been invited to participate in the planning and in the march itself. 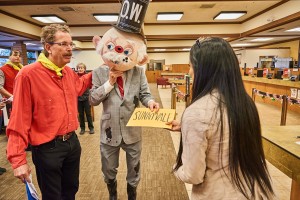 So far, organizers plan to make 12 “stagecoach stops” that include teach-ins, music, and theater (featuring an out-sized “Oily Wells” character). Marches will disseminate a re-branded logo as they visit some bank branches along the way. The culmination of the march will be a rally at Wells Fargo’s headquarters, with some marchers planning a non-violent civil disobedience ‘sit in.’

Ralph King, one of the march organizers, noted that only the marchers who “receive prior direct action training and support” will be allowed to participate in the acts of civil disobedience. He also said that people will be “welcome to march for as far and as long as they like – ‘day-trippers’ will be welcome.” 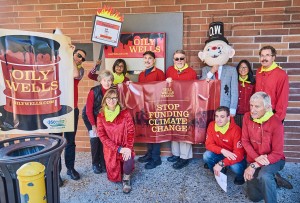 “Our goal is to attract hundreds of marchers,” King said, “so we are reaching out to a number of climate justice, social justice, and faith groups around the Bay Area, including 350 Bay Area, Idle No More, the Sunflower Alliance, and the Sierra Club, among others.” He noted that Niles Discovery Church was one group they specifically want to include. “We would be honored to march with you!” he said.