“It’s a challenge to interpret results like that,” Pastor Jeff said.

Recognizing that no time would work for everybody, the Ministry of Spiritual Life Team decided to schedule two worship services this Christmas Eve, at 7:30 p.m. and at 11:00 p.m. The choir will sing at the 11:00 p.m. service.

The 7:30 p.m. service will include an “instant pageant.” An ‘instant pageant’ is pretty much what it sounds like,” Pastor Jeff explained. “We will tell the Christmas story in word and song and people from the congregation, who will be recruited at the beginning of worship, act it out. There are no lines to learn, or even say, since the ‘acting’ is all done as pantomime. Overly simply costumes are provided. It’s just a bunch of fun.” 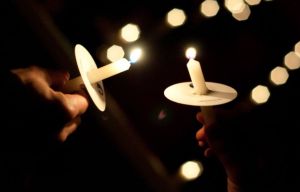 The 11:00 p.m. service will focus on the beloved Christmas carol, “Silent Night.” “It’s the song’s 200th anniversary,” Pastor Jeff explained, “so we’re going to tell some stories about the song and what it means to us today.”

Pastor Jeff said that both services will include candle lighting. He also said that he would like to include children and youth in the leadership of the service, be that reading one of the lessons or making a special music offering. Parents are asked to let him know by December 10 if their kids want to help out.