An invitation to the NorCal Climate Mobilization 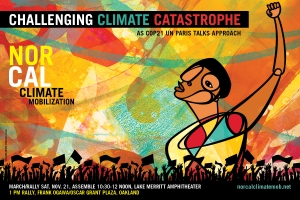 Extreme weather events around the globe, not the least of which is the drought we continue to experience here in California, remind us that weather patterns are changing, that climates are changing – and they are changing because of our continued burning of fossil fuels.

Climate change is happening so quickly that animal and plant species are unable to adapt. Many scientists think we are at the threshold of a mass extinction event on the order of the mass extinction that ended the age of the dinosaurs.

Climate change is also threatening humanity’s ability to grow the food needed to feed the 7.3 billion people on the planet. The impact of the California drought is evidence of this.

These realities make climate change the moral issue of our day.

The good news is that it’s not too late to act. But action needs to be international and it will take public pressure to make it happen. That’s why I am inviting you to join me at the NorCal Climate Mobilization – a march and rally on Saturday, November 21. People will begin assembling at 10:30 at the Lake Merritt Amphitheater, march to Frank Ogawa/Oscar Grant Plaza at around noon, and rally at the plaza following the march. Both the amphitheater and the plaza are near BART stops (Lake Merritt and 12th Street, respectively).

You are invited to bring signs and banners. Let me know if you’d like to BART to the event with me. The demands of the event are:  a global agreement to implement dramatic and rapid reduction in global warming pollution; and to keep fossil fuels in the ground by switching to 100% clean, safe, renewable energy. Learn more about the reasoning and results of the demands and details about the event at www.norcalclimatemob.net.